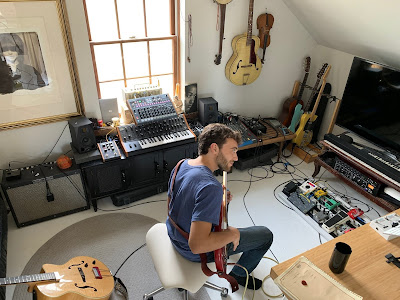 Nicholas Saia is a New York based guitarist, composer and teacher. An active performer  throughout the United States, he has led and participated in a multitude of varied and genre- defying ensembles. His main project is UHHM, an improvising trio with Christopher Frick on  keyboards as well as Jack Naden on drums. UHHM has released two albums described as “a  dizzying, heavily improvisational mix of satisfying songs… a worthwhile listen for fans of  free jazz and progressive rock.” (All About Jazz©), and have just recorded their third. He also  performs a set of solo guitar material that includes original compositions, improvisation, and  contemporary compositions by artists including Füting, Finck and Berio. Nick released a solo  album entitled "Bog Songs I" that includes his own writing as well as improvisation  highlighting concepts of prepared guitar and his search for unexplored sonic territory on the  instrument.
As a teacher, Nick seeks to impart his deep love of the instrument and respect for its history to  students of any age. He believes that it is never too early to learn theory and technique, but no  one is ever too old or advanced to still have fun on the instrument. Nick graduated from the  Peabody Institute of Music with a Bachelors Degree in composition. There, he studied with  Felipe Lara as well as Oscar Bettison, Michael Formanek and Paul Bollenback in areas such  as  composition, improvising and arranging. He is steeped in improvising traditions beginning  with jazz-manouche, American folk music, and through more modern and experimental  worlds. In addition to Peabody, he is a two time alumni of Brooklyn’s School of Improvised  Music and the Thelonious Monk Institute of Jazz where he was selected to tour from Los  Angeles to the Mendecino Jazz Festival as a member of the All-Star Quintet.